skip to main | skip to sidebar

Ed Begley, Jr. is star of the hit environmental TV series, Living with Ed. He is being honored as the actor who is most dedicated to helping the environment for over 30 years.

Please scroll down for a slideshow of event.
About Ed Begley, Jr.
Inspired by the works of his Academy Award-winning father, Ed Begley, Jr. became an actor. He first came to audiences’ attention for his portrayal of Dr. Victor Ehrlich on the long-running hit television series, St. Elsewhere, for which he received six Emmy nominations. Since then Begley has moved easily between feature, television and theatre projects.

Ed can currently be seen in the hit Seth Rogan/Judd Apatow film, Pineapple Express, as well as many Christopher Guest films, including A Mighty Wind, Best In Show and For Your Consideration.

Other feature film credits include Batman Forever, The Accidental Tourist and The In-Laws.

On television, Begley is appearing in the new CBS comedy on Wednesday night called Gary Unmarried He has also been seen recently in Recount with Kevin Spacey, Tom Wilkinson and Laura Dern, as well as recurring roles on Six Feet Under, Arrested Development and Boston Legal.

Begley also starred in the West Coast premiere of David Mamet’s Cryptogram, at the Geffen Playhouse, in the role that he first performed in Boston and then in New York. He also starred in Mr. Mamet’s production of “Romance” last fall at the Mark Taper Forum.

Ed has directed several episodes of the hit show NYPD Blue as well as a play that he wrote called Cesar and Ruben that won a Nos Otros Award and four Valley Theater League Awards.

A committed environmentalist for more than thirty years, Ed Begley, Jr. has always tried to “live simply so others may simply live.”

Turning up at Hollywood events on his bicycle, Ed has been considered an environmental leader in the Hollywood community for many years.

He has served as chairman of the Environmental Media Association and the Santa Monica Mountains Conservancy. He still serves on those boards, as well as the Thoreau Institute, the Earth Communications Office, Tree People and Friends of the Earth, among many others.

His work in the environmental community has earned him a number of awards from some of the most prestigious environmental groups in the nation.
~~~
The event was held at National Green Museum, 1640 North Wells Street, two blocks from Sedgwick elevated in Old Town (½ block north of North Avenue, across the street from Treasure Island).

National Green Museum wishes to thank Ed Kugler and Organic Food Club's Taste-A-Thon for supplying the refreshments and taking the photos in the slideshow (except the third picture, which shows Eddie Kugler with Ed Begley).

Posted by National Green Museum at 12:26 PM No comments: 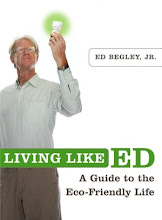